LANDSCAPE PATTERN VERSUS FARMING DEVELOPMENT. THE CASE OF THE POST-MARL HOLLOWS (PMH) LANDSCAPE IN POLAND

This article discusses the presence of unique landscape elements (post-marl hollows) in an intensively operated farming region. The selected case study (the environs of Krotoszyn in the Wielkopolska region, Poland) represents an example of a human-designed landscape in which post-marl hollows (PMH) were created as a consequence of the soil-marling process. PMH are vital ecological habitats which have an influence on the high quality of the rural landscape. Currently, as PMH are undergoing the vanishing process, it seems essential to find a solution to maintain these unique landscape elements. The main aim of this paper is to analyse human-nature relationships during the current changes taking place in the agricultural landscape in order to get the answer to the question: how is this affecting the PMH? The study evaluates farmers’ pro-environmental behaviour and defines their identity with the local landscape that has been beneficial in predicting the forthcoming shaping of the landscape. The data describing the PMH were collected in the years 1998-2016, while conducting cartographic analysis, a literature review and repetitive field research. Additionally, remote sensing and geoportal database were used to analyse the PMH changes. Also, interviews and discussions with farmers and representatives of the local administrative body were conducted. Results indicated that local rural communities are little concerned about the environment, particularly when it pertains to the issue of conservation of the local landscape heritage (i.e. PMH). In addition, the lack of support from the administrative body makes more difficult the opportunity to maintain a unique landscape pattern, as described in this paper.

THE COLLECTIVE MEMORY AS A TRAUMA FOR THE GERMAN ETHNICS FROM ROMANIA. CASE STUDY: GERMANS’ DEPORTATIONS FROM BUKOWINA TO THE SOVIET UNION (1945-1949)

This study refers to the shapes in which space and time can become traumatic memories. The venture between time and space mimes an identity breach both in the personal and collective history. The deportation represented the wound in the German history for whether Germans from Romania or from different other countries under Soviet influence at the end of the Second World War. The events that occurred during the Second World War affected the entire world and the consequences of the war were catastrophic for Germany as it was losing the war. Also the consequences of losing the war by Germany were noticed by the German ethnics who lived in the areas occupied by Russia. Germans were picked up for deportation with the sole purpose of using them for rebuilding the economy and infrastructure of the Soviet Union. Memories of the deported, collected through interview, represent the unique source of documentary material which is also a cry for help over the drama and horrors of deportations that are now more real than ever and can be seen in physical and psychological traumas that are now visible scars.

REPRESENTATIONS OF LOCAL IDENTITY THROUGH LANDMARKS: THE REHABILITATION OF RUPEA FORTRESS, ROMANIA

Over the centuries a community’s built heritage was shaped according to the members’ needs and skills, using the available resources, making it comparable to a palimpsest on which the evidence of every change was preserved in distinct layers. Based on historical documents, illustrations and recent observations, the purpose of this approach is to increase the level of understanding and preservation of historical monuments with their rich cultural significance, using as an example the less known, recently rehabilitated Rupea Fortress, in Brașov County. It is clear that the rehabilitation was focused exclusively on the technical side, proved by the lack of a well managed tour guide system with authorised guides and the lack of additional studies to the main project, making this approach well timed. The basalt cliff on which the fortress was strategically built is also a natural monument (IUCN Category III), considered as a geological heritage itself, increasing the uniqueness of this representative historic site. The distinctive perceptual skyline of this landmarks is part of the collective memory, local history and identity which justifies all the conservation and research efforts for the future generations, as part of long-term and sustainable development.

Roșia Montană is currently a village (former town) in Transylvania, with a declining population of about 4,000. But it is at the same time one of the most famous villages in Romania, due to the controversy surrounding it, which led to major public manifestations and protests in the autumn of 2013. In a way, the project of Gabriel Resources, which sought to obliterate the historical site and replace it with an open pit gold mine and a cyanide lake was so outrageous that it actually helped popularize the vast heritage of the village and offered an incentive to promote it on the UNESCO World Heritage List, thus protecting it from further such claims. The Faculty of Architecture in Cluj found this a great opportunity for an international workshop with our French colleagues in ENSA Clermont Ferrand, who were glad to travel to Cluj and exchange ideas and even a small project for a few days. During their stay, we visited the site and chose one of the most interesting but sadly deteriorated buildings as grounds for a restoration project – the Reformed Parsonage. Our workshop focused also on a documentary assignment that bid our students to search out for similar cases to Roșia Montană in Europe and the whole world, so as to draw some conclusions about what is specific and what is similar in this particular context. This paper gives a glimpse into the research we undertook with our students and our findings. One such similar case we found with our students would be Kremnica in Slovakia, also sitting on a sizeable gold deposit coveted by a Canadian mining company that promoted open pit cyanide mining there. There are open pit mining sites that threaten to engulf entire towns like Cerro de Pasco (Peru), but also sites that have been put to better use like in Curitiba (Brazil) and Falun (Sweden) and have been converted in cultural venues. Overall, the goal of the effort was to use the entire collective to determine similar cases around the world, resulting in contextual and viable architectural projects, particularly adapted to the special situation in Roşia Montană, some of which will be presented in short as results of this research.

The main purpose of this paper is to demonstrate how territorial identity, expressed through immaterial and material heritage, especially folklore and traditional crafts, can be a means of economic sustainable development in rural areas. As a case study, we choose the Land of Călata (Hu. Kalotaszeg), a region from North-Western Transylvania, Romania, focusing on two of its best-known villages: Izvoru Crișului (Hu. Körösfő) and Sâncraiu (Hu. Kalotaszentkirály). Izvoru Crișului is appreciated for carpentry and handicrafts products, whilst Sâncraiu is well-known for its Hungarian folk music and dance festival. In order to illustrate how these activities can lead to economic development, we interviewed a craftsman family from Izvoru Crișului and a dance instructor, cofounder of the International folk music and dance camp that is held annually in Sâncraiu. We also analysed several handicrafts stalls from Izvoru Crișului to see exactly what kind of products were being sold in there. The results show that even though traditional crafts could generate an income for the local people, most of the products sold in Izvoru Crișului are not authentic, but actually kitsch products brought there from other regions of Romania or abroad. On the other hand, the international folk music and dance camp from Sâncraiu is the best example of how a one-week event can help local economy by generating income for various stakeholders involved in the organisation and realisation of the event, and be the igniter of a larger agro-touristic activity. In the end, we concluded with several remarks concerning the need for raising awareness among the locals how to benefit from their cultural heritage and traditional occupations and we acknowledged the potential of traditional crafts and folklore as a means of diversifying income possibilities in rural areas.

“AND FROM MILITARY FRONTIER GUARDS THEY MADE US PEASANTS …”

„Şi ne-au făcut din grăniţeri, ţărani…”. Mentalităţi colective în satele năsăudene foste grănicereşti în a doua jumătate a secolului al XIX-lea [“And from military frontier guards they made us peasants …”. Collective Mentalities in the Former Military Frontier Villages, in Năsăud Region, during the Second Half of the 19th Century] / 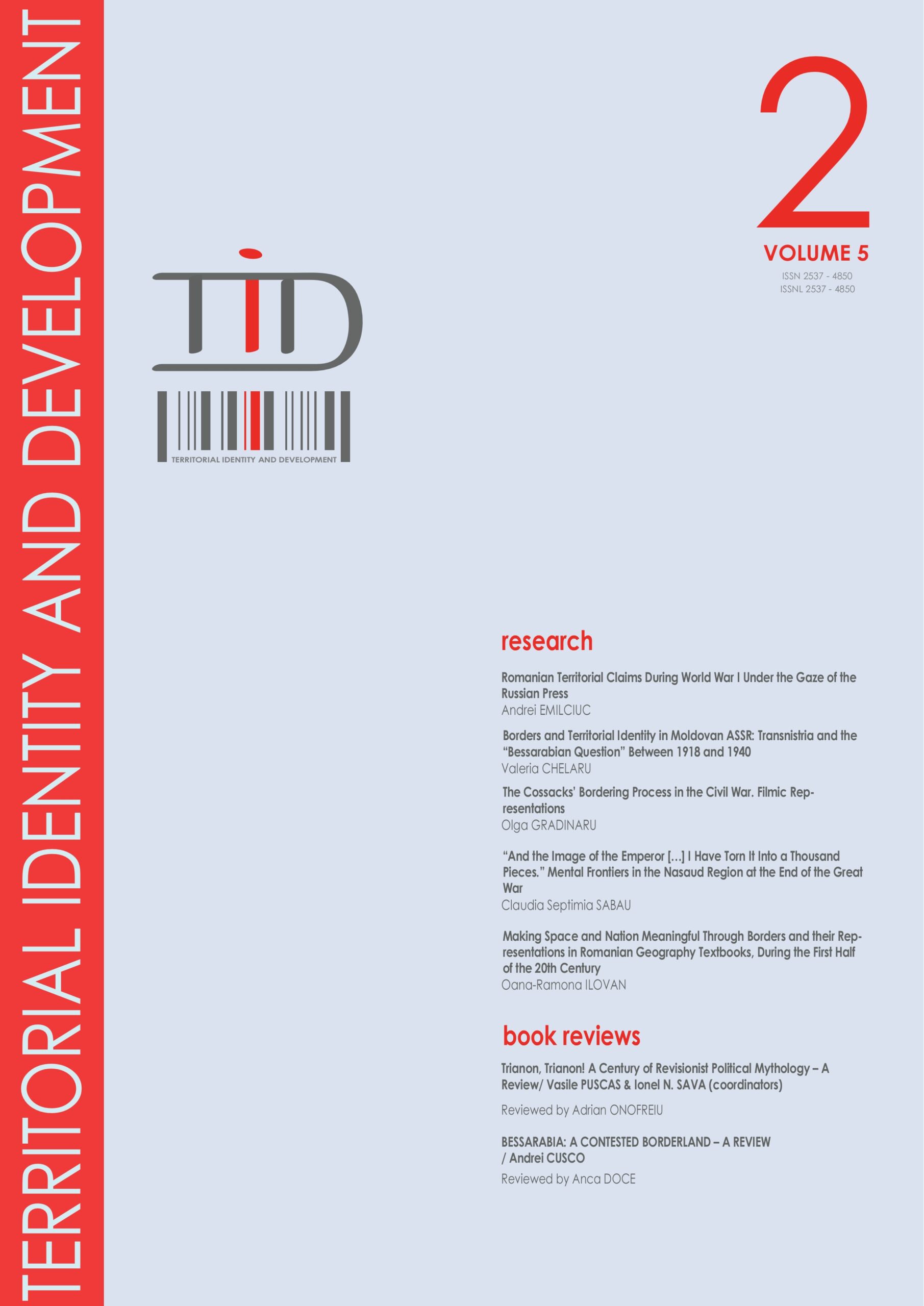